Racers at the Herington Air Strip Showdown had blustery conditions to contend with May 21 as they sent their cars down the racetrack.Free Access 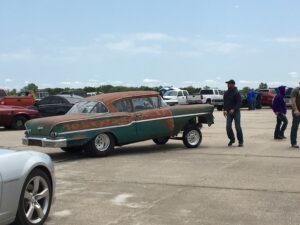 A 1958 Chevy “gasser”-style hot rod maneuvers through the pit lanes at the Herington Air Base Showdown May 21. Drivers can race as many times as they wish, against as many other vehicles as they want, and the only prize for winning a race is bragging rights — there are no trophies or cash offered. 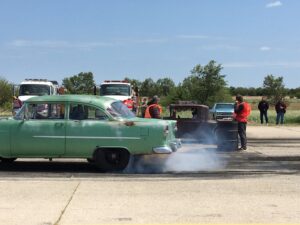 A 1955 Chevy completes a burnout before a race at the Herington Air Base Showdown May 21. About 100 cars showed up for the community drag races.

About 100 people brought their cars to the Herington Airport to test their mettle against neighbors, friends, and strangers alike. The drag races are a “run what you bring” setup, with all makes and models of vehicles welcomed. Drivers raced against whoever happened to be in the lineup next to them.

This format led to non-typical drag racing mashups, like a twin-turbocharged 1935 International Harvester pickup truck against a BMW sedan, or a 1980s station wagon staged next to a 1958 Chevy Impala gasser. Some racers tried to keep the pairings as even as possible, like two Camaros of different generations, or an identical brace of Honda Civic hatchbacks. Many foreign models were represented alongside domestic manufacturers, but 50 years’ worth of examples from the Big Three Detroit automakers dominated the scene.

People could also race against any driver they wished, and they could make as many passes down the track as they wanted – or as many as their car allowed. The drag strip is about 600 feet long and races begin with a traditional flag drop. There are no timers or signs to tell racers how fast their run was, and there are no separate classes or schedules depending on the type of vehicle. Motorcycles, ATVs, and side-by-sides are currently not allowed to race.

There are no awards or prizes for racers, just bragging rights earned and lost. Local resident Trent Shade said he’s been coming to the Herington drags ever since the first event was held in 2012. He was only a spectator this year, as he said his Fox-body Ford Mustang with a 615-horsepower Windsor engine is “under construction” right now.

“I’m hoping to be out here next year,” Shade said. “Got most of the parts picked up, got a lot of welding to do, some fabrication, but we’ll try to make it.”

Shade said any event “with fast cars and just a bunch of people out having fun” is worth getting involved in.

“There’s not really any competition out here, we’re just out having a good time,” Shade said.

The next Herington Air Strip Showdown is being planned for this fall. More information can be found on the Herington Air Base Showdown Facebook page.