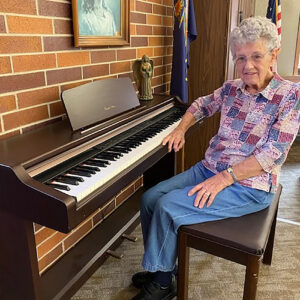 For nearly 80 years, Anita Singular has played the church organ for St. Paul’s Lutheran Church at Linn. Except for the year and a half that she spent in Germany when her late husband, Don, was in the Air Force, the 90-year-old has attended the same church since her family moved to Linn from Norway, Kan., when she was in the fourth grade.

Singular and her sister, Darlene Mack, now of Salina, took piano lessons and began playing the organ at church when needed. Their mother played “a little” by ear, Singular said, but couldn’t read sheet music. By contrast, Singular does not play by ear or by memory and instead relies on sheet music, even after all these years.

She said that those who play piano cannot automatically play the organ.
She said she mostly taught herself to play the organ, though she thought her sister might have
helped her some. Singular said the first organ she played at the church was an old pump organ.
“That was work,” she said. The church eventually got an electric organ.

“Like any hobby, you enjoy doing it,” Singular said of playing the organ at church for so many years.

She has an organ at home, she said, and she used to sit down with the intent to play for 10 minutes only to find out that 2 hours had passed. She likes most music and doesn’t have a favorite song to play, she said, though waltzes, jazz and hymns are her favorites.

She has played for funerals, weddings, and nursing home church services. Singular, who worked at the Washington County Hospital before helping start the health department in the 1960s, taught piano lessons in her “younger years.” All three of her children – Jill, Kent and Lee – played “a little bit” of piano.

The church had as many as four organists at one time, including Singular, her sister Darlene Mack, and Sylvia Mai. The organists would each take a month as church organist. For a few years, Singular was the only church organist. Evelyn Peterson plays for the church now and came a few years ago when a Brantford church closed.

Peterson and Singular alternated church duties until Singular retired from the church organ in April 2021 because of issues with her neck. Singular moved to the Linn Community Nursing Home a few weeks ago and has been asked to
play the organ at the nursing home.