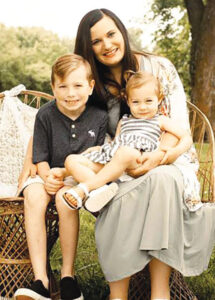 Taryn Kustanborter’s generosity has made a positive impact during these times of upheaval.

Kustanborter, who owns and operates a daycare in Chanute, donated 1,500 ounces of breastmilk to a Wichita-area hospital’s neonatal intensive care unit.
A mother of two, Kustanborter was able to produce the breastmilk while nursing her infant daughter Ellie, who remained well-supplied. Breastmilk production for a one to six month-old is in the range of 25 to 35 ounces per a 24-hour period.
It came to Kustanborter’s attention that breastmilk and formula had been increasingly difficult to track down during the onset of the COVID-19 pandemic. She then came across the Facebook page “Human Milk 4 Human Babies – Kansas.”
“I found a couple of moms on there that had babies in the NICU, and they were looking for milk for their babies,” Kustanborter said. “Because they were either unable to produce or just needed milk for their babies to get through. So I decided to donate at that point.”
Through the Facebook page, Kustanborter connected with the Wichita-area mothers, with one of them making the trip to Chanute to collect the breastmilk Kustanborter had stored in Ziploc bags in a freezer.
“And I was also able to donate locally to a baby in Chanute,” she said.
Kustanborter noted that it was initially challenging to find an entity that would accept the donation. She said Neosho Memorial Regional Medical Center declined, and that she had also posted on Facebook with little success.
“But once somebody told me about the Facebook group it went fast,” she said.
It took multiple weeks of production for Kustanborter to accumulate that amount of breastmilk. She said that the process was slightly stressful, and that it was tough to see her supply go. At the end of the day, however, Kustanborter is delighted with her decision to donate.
“I was able to talk to one of the mothers afterward and she said the baby was doing well,” Kustanborter said.
Neosho County Health Department board certified lactation consultant Stephanie Henry said the production of breast milk varies from mom to mom.
“It just depends — the good Lord made us all different,” she said. “Some moms could maybe (produce 1,500 ounces) in several months, others it would take longer or less time. So it just varies. That’s nothing that’s concrete and set.”
Centers for Disease Control data shows that the percentage of infants who are ever breastfed is 84.1 percent. It drops to 58.3 percent when the infant hits six months of age, and 35.3 percent at one year.
According to webmd.com, breastmilk provides ideal nutrition for infants, featuring a “nearly perfect mix of vitamins, protein and fat.” Breastfeeding lowers babies’ risk of having asthma or allergies, and the website also notes that babies who breastfeed exclusively during their first six months have “fewer ear infections, respiratory illnesses, hospitalizations and trips to the doctor.” Studies have shown breastfeeding has also been linked to higher IQ scores in later childhood.
Kustanborter called it a humbling experience. 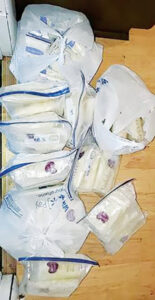 Approximately 1,500 ounces of breastmilk was donated to Wichita families with babies in NICU.

“With COVID-19 hitting, and feeling down on myself at that time, it was just a good experience to feel like I was able to help other people,” she said. “Especially people who just came into the world a little too early.”

Kustanborter said she was not seeking recognition for her generosity, but is hopeful that other mothers will potentially follow her lead.