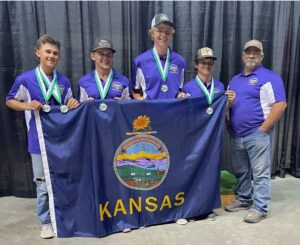 For the first time in 22 years, the state of Kansas is the home of the National 4-H Shooting Sports Sweepstakes Championship team. Two Greenwood County 4-Hers, as well as a coach from Greenwood County, represented the state in the Archery-Compound discipline at the national contest, held in Grand Island, Neb., from June 26-July 1, and also helped claim the first Archery-Compound national championship for the state of Kansas.

Wylee Boulanger and Barrett Pirtle, both members of the Harmony Sunflowers 4-H Club, represented Kansas, along with two other archers from the Frontier District, Nathan Livingston (Franklin County) and Dylon Harris (Osage County). Brad Boulanger, Greenwood County archery instructor, was selected as the Kansas Team Archery Coach for the National Team. The Kansas Archery-Compound team claimed first place in the FITA and 3D competitions and was runner-up in the Field division and claimed the Overall 1st Place Compound Archery title, for the first time in the history of shooting sports, which began in 1980.

During the National 4-H Shooting Sports Championships, 4-Hers from across the nation competed in one of nine disciplines that they had qualified for during state contests. Only 4-H senior participants (ages 14-18) are eligible to compete at nationals, and are selected based on their state finishes in the following disciplines:  Air pistol, Air rifle, Archery- compound, Archery- recurve, Hunting skills, Muzzleloader, Shotgun, Small bore pistol and Small bore rifle. 4-Hers are only able to compete in a discipline at the national level one time; but can compete in various disciplines if their state offers that discipline and they qualify for the event. Greenwood County currently offers three of the nine during the county fair: Shotgun, Archery-compound and Archery-recurve.

Although 4-H shooting sports began in 1980, the National 4-H Shooting Sports Championships didn’t begin until 2000. The Tom Davison Sweepstakes is awarded to the state that has a complete team (competing in all nine disciplines) that accumulates the highest points for the year. This year, seven states were able to compete in the sweepstakes contest with Kansas claiming their first ever sweepstakes by two points. Louisiana was second with Texas placing third. Other states competing in the sweepstakes were: Colorado, South Dakota, Missouri and North Carolina.

W. Boulanger, Pirtle, Livingston and Harris competed in three contests with their compound bows: FITA, Field and 3D. The team claimed 1st in FITA with Pirtle placing 2nd as an individual with 669 points; W. Boulanger placed 6th with a score of 657. Harris was 22nd with 631 and Livingston was 30th with 629.

In the field division, Kansas placed second as a team with Pirtle again finishing in 2nd place with 260 points. W. Boulanger was 26th with 236, Harris was 32nd with 234 and Livingston was 68thwith 217. In the final division, 3D, the team claimed the title with Pirtle leading the team with 269 points for 3rd place, W. Boulanger with 267 points for fourth place Harris with 255 for 9th and Livingston finishing with 197 points.

Over the weekend, Herald staff was able to meet up with W. Boulanger who shared the best part of the experience was meeting new people and making new friends from all over the country. When asked what he loved most about archery, W. Boulanger stated, “I love all the opportunities it’s giving me, like going to nationals for an example.” He also shared that archery has taught him to not dwell on things that go wrong, because “you can always come back from it.” W. Boulanger hopes to keep improving his knowledge of the sport and keep learning things to make him the best that he can be.

The Greenwood County shooting sport events kick off this Saturday, July 9, at 9 a.m., at 2135 S. Road, in Eureka, with the Archery shoot. 4-Hers enrolled in both the recurve and/or compound divisions will shoot.    The shooting sport contests will continue on Sunday, July 10, at 4 p.m., with the Shotgun shoot at the Eureka Gun Range, at 4 p.m. The event will be followed by the awards/banquet ceremony at the Matt Samuels Community Building, tentatively slated for 7 p.m.  The public is welcome to attend all 4-H events and cheer on county youth.