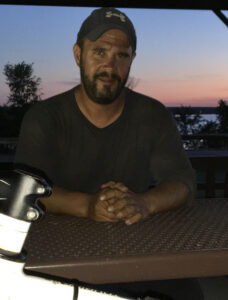 Marco Isele said he is not a cyclist, but he’s biking across the U.S. anyway.

“Everything hurts,” Isele said. “I’m not a biker. I like to drink beer and smoke cigarettes.”

Isele, a native of Germany, is undertaking a cross-country bicycle trip to raise money for a children’s cancer center in a hospital in Cologne. He stopped at the Council Grove Reservoir Wednesday evening to camp and speak with the Republican about his journey.

Isele, 42, was stuck in the Cologne hospital for five weeks with a back injury, and during his stay he said he gained a new outlook on life from seeing children battle cancer.

“It was terrible to see,” Isele said. “They have no hair … five years old, six years old. Maybe they’re dying. It’s so unfair. I have a son, and he’s fine, but I’d pay everything to make sure he was fine if he wasn’t.”

Isele said he felt compelled to help the children in some way. He decided he wanted to raise money to provide childhood cancer patients in that hospital with outdoor recreation opportunities, like horseback riding and swimming. He’s raising €6,000, or about $6,500, through online donations. A link to donate toward Isele’s fundraiser can be found on his Instagram account, @marco__isele.

Isele said Germany is much like the U.S. in that the country has enough money to support a more enhanced childhood cancer care program but chooses not to.

“They are a rich country, they have enough money,” Isele said. “I don’t understand it. So, I asked myself, ‘What can I do to make the lives of these kids a little bit better?’”

Just a couple days after leaving the hospital, Isele said he quit his good corporate job, sold his apartment, and bought a bike and some outdoor gear. He also bought a plane ticket from Frankfurt, Germany, to Los Angeles, along with a return-trip ticket for July 23 out of New York.

Isele’s plan is to cycle across the U.S. to New York City, and then grab a flight over to the United Kingdom to ride his bike across England, Scotland, then into France and Belgium before returning to his home country in August. He said the children in the cancer ward are following along with his adventure on Instagram, and they’ll suggest things for him to do – like cycling up Pike’s Peak.

“It was terrible,” Isele said. “Everybody in Germany knows Pike’s Peak, because of the car race (Pike’s Peak Hill Climb). I was huffing and puffing … a 10-year-old kid said to me, ‘You should do Pike’s Peak.’ I said, ‘Well maybe, it’s 150 miles out of my way.’ And the kid said to me, ‘I must fight every day, you can fight just two days.’”

Isele reached the gift shop at the mountain’s summit at 14,115 feet. He said he’s been surprised by the kindness of strangers he’s encountered, including Council Grove resident Lisa Paul, who helped him set up camp and provided him with some essentials, like a flashlight and phone charger.

“I just think what he’s doing is spectacular,” Paul said. “It’s so cool, and it’s actually impressive that he’s not a cyclist or anything. He’s just doing it to help children. I think that’s pretty amazing.”

Isele said one thing he wasn’t prepared for when traversing Kansas was the notorious wind.

“I can’t believe it, it’s always in my face,” Isele said. “It’s as if somebody is taking the brake lever and holding it down.”

Before working as a personnel manager for a large construction company, Isele served in the German Army as a member of “Presseausweis,” or the press corps. He said the most beautiful thing he’s seen so far on his journey is “the people.”