A place in history: IHS legend reflects on track record

Open Audio Article Player
Count former Iola High School football and track legend Peda Samuel among those most surprised to hear his old IHS sprinting record had been broken — namely, because he never realized he had held the record. 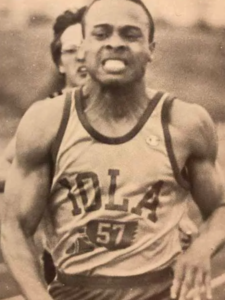 Peda Samuel admitted to being a bit bewildered after hearing one of his school records had been broken Saturday.

It wasn’t necessarily that he was surprised Iola High’s Brett Willis bettered his mark of 10.82 seconds set in 1984, when he ran the 100 meters in 10.74 seconds at the recent state track meet.

The surprise was that for the past 38 years, Samuel didn’t even know he held the school record.

“I thought Juan Wallace had the record,” Samuel said in a telephone interview last week. “I never knew I held it. I never knew anything about it.

“I’ve gotta commend the kid,” Samuel chuckled. “That’s the thing about records. They’re there to fall.”

Samuel spoke from his home in Duncan, S.C., where he settled after a few years of professional football.

SAMUEL’S TIME in Iola was a brief two years, but it was long enough to cement his legacy in local sports lore to almost mythical status.

One play in particular stood out to Johnson when Samuel took a simple trap play hand-off and found a gap in the Charger secondary. “He zipped through the hole, shook off a linebacker, winked at a safety and streaked 65 yards for the Mustangs’ second TD,” Johnson wrote.

That paled in comparison, however, to when Samuel suited up for the IHS track team the next spring.

Longtime head coach Marv Smith recounted a highly anticipated meet in Girard, featuring some of the best athletes in the region, including some from Missouri and Oklahoma.

The first three events were planned. Those were in Samuel’s proverbial wheelhouse.

The longer relay? Not so much.

“Peda was wanting to drop out of the relay, which we were going to win anyway,” Smith noted.

In the run-up to the relay — the final event of the night — Samuel and Smith went back and forth about whether he needed to run it.

In the interim, of course, Samuel still needed to run the other races.

By the time the finals came around, Samuel was in high gear. He breezed to gold in the 100-meter finals. And lowered his record in the process.

By then, it was fully apparent what Samuel was about to do in the 200-meter final. “He breaks that record again,” Smith chuckled.

As the end of the meet drew near, it was a foregone conclusion that Samuel was in line to receive not only multiple gold medals, but a special award for outstanding athlete of the meet.

So Smith offered Samuel one last bit of advice before the final relay.

“This might be the last time you ever run this relay,” Smith told his star athletes. “How would you feel, getting that award, knowing you had dropped out of your last race?”

Samuel relented. Of course they won.

“That was the most amazing performance I’ve seen a kid do,” Smith said.

As an aside, Samuel and Wallace both wound up being two of the most decorated sprinters ever in IHS history, and even though they ran on the same team in the spring of 1983, they never were able to run on the same relay, Smith noted, primarily because a hamstring injury curtailed Wallace’s track season that year. “It would have been something to see,” Smith laments.

Samuel credits Smith for helping him turn his athletic gifts into something special.

“Marv Smith was probably my single biggest motivator while I was at Iola,” Samuel said. “He could talk me into doing things, to get another rep, that I didn’t think I could do. ‘Just try this. Just try that. I want you to do one more hand-off.’ He put me in position to have success. At the time I didn’t know what was going on. I always wondered why he had me doing those things. I credit him for 100% of the success I had.

“It’s amazing what having a good coach can provide for you,” he said. “It can provide you a lot of success in life. He was there for me. I had guys like him and Coach (Pat) Lonergan and Coach (Greg) Ptacek.”

THE FUNNY part about Samuel’s success at Iola was that neither football nor track were his favorite sport.

It was baseball, but of course IHS had no baseball program at the time.

Nevertheless, Samuel was a star on Iola’s American Legion summer team that earned second place in that year’s state tournament.

Samuel grew up in South Carolina in a family of ball players. His father played professional ball. His uncle, Amado Samuel, earned the distinction of being the first Dominican-born ball player to make it to the Major Leagues in the 1960s for the New York Mets.

In the long run, Iola’s not having a high school baseball program at the time probably benefited Samuel’s athletic career, he admitted.

“If I was playing baseball, I wouldn’t have done track,” he noted. “Marv taught me that when I ran, I was leaning too far back. I was pretty quick, but he trained me the proper running form, the things I needed to do.”

AFTER HIGH school, Samuel enrolled at Allen Community College on a baseball scholarship. He played well, but his playing time was limited because the Red Devils had another center fielder already ensconced in the starting lineup.

A couple of old high school football teammates, brothers Kurt and Kent Thompson, noted Samuel had other opportunities to play on the gridiron.

“They talked to a coach at Independence Community College who remembered who I was,” Samuel said.

So he enrolled at Independence, but never played a game there after redshirting his sophomore year. That’s because the coach became the recruiting coordinator at the University of Kansas, and encouraged Samuel to become a Jayhawk.

“So he took me with him,” Samuel said.

Samuel’s first two years at KU were somewhat productive as a receiver under coach Bob Valesante, but the Jayhawks as a team struggled mightily in the Big 8 Conference.

Valesante was fired after Samuel’s junior season, bringing in Glen Mason to helm the program.

“Coach Mason came, and I got to talking to the coaching staff about wanting to play defensive back,” he said. “They said I could, but I’d be at the bottom of the depth chart. It was like starting over.”

Nevertheless, Samuel quickly impressed his coaches with his ball-hawking ability and his willingness to take on larger blockers and receivers.

“The team struggled, but I had a great time,” Samuel said. “I worked hard and we got to play against some of the best teams, and the top talent in the country.”

Players such as Barry Sanders, Thurman Thomas, Neil Smith and Aundray Bruce suited up against the Jayhawks in Samuel’s time in the crimson and blue.

“I took it upon myself to be the best I could,” Samuel said. “There’s a matter of pride involved.”

Samuel earned the league honors, despite suffering a groin injury and playing sparingly the last few games of the season.

“It meant a lot to still get recognition, even though I was hurt and the team was struggling,” he said.

AFTER KU, Samuel tried out for the Toronto Argonauts of the Canadian Football League, and even suited up in training camp for the Kansas City Chiefs.

At the time, Kansas City sported one of the most talented defensive secondaries in the NFL with starters Albert Lewis, Kevin Ross and Deron Cherry firmly entrenched in the starting lineup.

“I hated being cut, but it was a heck of an opportunity,” Samuel said.

When that league folded, he caught on in the Arena League for the Charlotte Rage.

“It was OK, but there comes a time when you still like to play, but I had a daughter by then, and it was time to man up and start working.”

Samuel briefly considered getting into coaching, but realized the coaching profession also was volatile.

For the past 26 years, Samuel has worked as a trainer for a local cable company in his native South Carolina, where he trains repairmen and technicians. He and wife Yolanda (née Williams) have three grown children, including a daughter, a crackerjack softball player who played for the University of Kentucky in the College World Series in 2014.

“I could never sit in one spot and watch a game,” he admitted. “When you’re a player, you can control what you do. You can’t do that as a spectator. The nerves would get to me.”

His father moved from South Carolina to Kansas to work at the Wolf Creek nuclear power plant. He attended high school for two years in Yates Center, then moved briefly to Virginia, before returning to southeast Kansas, this time Iola.

Samuel relishes his time in Iola, where his wife’s mother still lives.

In fact, they plan on being back in Allen County later this month, and he hopes to catch up with his old friends.

“Funny thing is, when we come back to Iola, I usually spend more time at Bill Walden’s house than I do at my mother-in-law’s,” he laughed.

He also catches up with Coach Smith frequently, and other Mustang alumni, such as Mackie McIntosh.

“I’m kind of embarrassed to say this, but I’ve never been to an Iola High School football game since I played there,” he admitted. “For some reason, it just never happened.”

Samuel hopes to pay another Iolan a visit when he’s in town, the school’s new 100-meter record holder.

“I think it would be neat just to say hello and to congratulate him,” he said. “I loved my time in Iola. I’m a Mustang for life.”

A place in history: IHS legend reflects on track record